Test fits are important.  With this project it was to the point where I needed assistance to do a test fit, but it’s good that I didn’t skip them, because I found that these parts were an inch too short:

An inch too short! Had to remake them.

The problem is that I sized them to the space between the legs (the same length as the short aprons) rather than the space between the long aprons, which is longer.  I guess this is a possible gotcha when sizing parts from the project instead of working with dimensions and plans.  (Note that these weren’t the simplest parts.)

So here’s the final test fit with the shelf omitted to expose the internal parts: 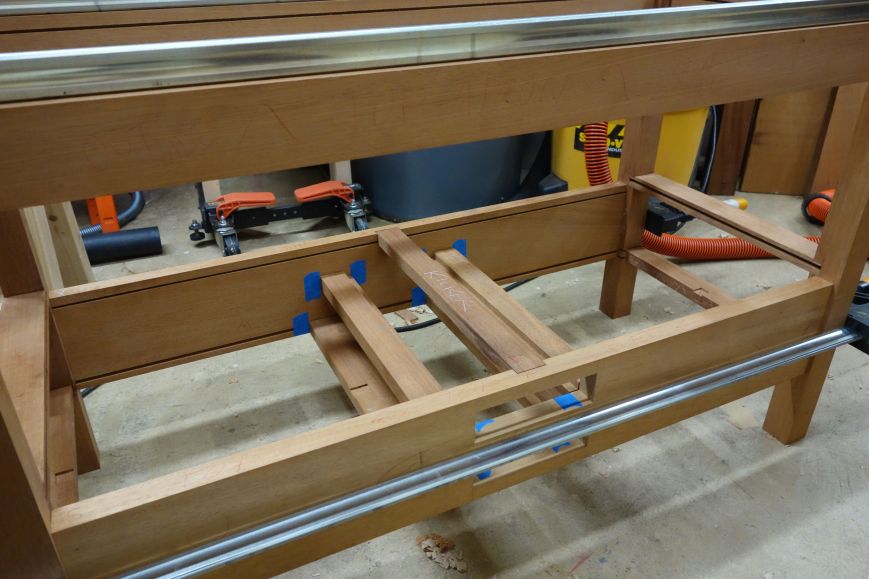 The blue tape marked the edges of the drawer support pieces which all have side-to-side slop.  I carefully checked that they were square to the front, where the openings for the drawers were located.

A friend came over to help with the glue-up.  I chose fish glue for this project because of its long open time.  When we to to the point of checking the drawer supports for square, my friend tried a different method: he quickly trimmed a stick to the width and ran it up and down the drawer cavity space.  His method actually checks the cavity for parallel sides, which is what really matters for smooth running drawers. And it was giving a different result than my test for square to the front!

I discovered that the apron with the drawer openings was not flat, so my reference surface was no good.  We adjusted the drawer openings to be parallel to each other as best we good rather than square to the face.   The glue-up took about 45 minutes.

After the glue was dry, with the clamps off, I discovered that one thing had gone wrong during the glue up.  The shelf had shifted sideways, mainly at one end (which means it twisted).  You can see the effect in the pictures below.  The shelf was supposed to stick out 1/4″ from the leg, and of course by the same amount on both sides. 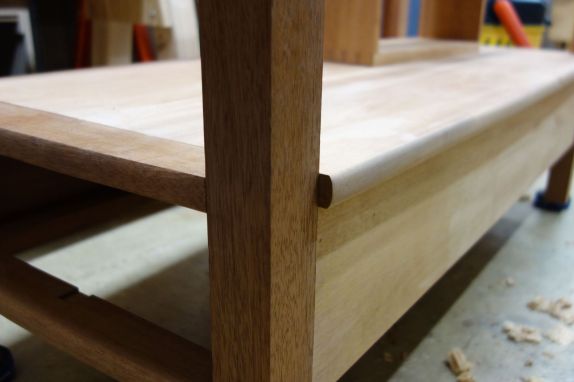 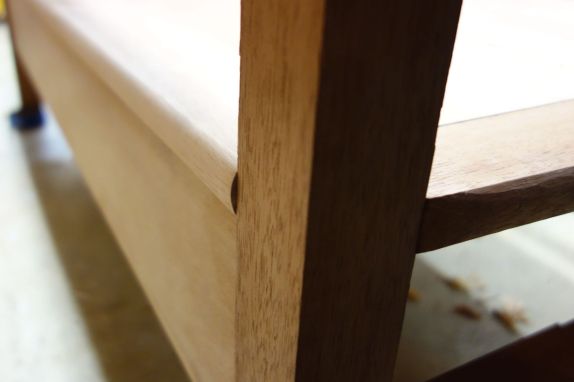 It appears that in addition to the obvious problem shown above, the whole structure is not as square as when we first put it together and checked for square, and a tiny gap has appeared between the shelf and the rails that support the shelf.  There’s not much I can do to fix any of this.  Planing down the high side is about it.  I think the lesson is that parts need something to register them during glue up.  I had marks to center the shelf, and I spent a lot of effort figuring out where those marks should be and making sure the projection was balanced on each side.  And we lined up those marks when we put the shelf in.  But at the end of the glue up I forgot to check that the marks were still lined up.   (It didn’t help that the marks were visible only from the top and most of the glue up had the table upside down.)