My latest big project is a chest to go at the end of the bed. We had a bench there, but piles of clothing and linens covered its surface, and hence I could never actually sit on it. Storage in a small, old house is scarce, so I decided to replace the bench with a storage cabinet. The standard chest at the end of a bed opens on the top. If we had such a chest we’d never be able to open it, so my design features sliding doors and drawers. The top remains available for piles of clothing, and a backsplash prevents the piles from dripping off onto the bed.  The current design appears above, though I still have some uncertainty about the drawer widths. Work has been proceeding at a glacial pace over the past couple years

This cabinet will be made out of quarter sawn hard maple. I had difficulty buying quarter sawn maple. I found a guy with a chainsaw who sold me a small lot cut from one log. It had some very nice boards in it, some up to 11 inches wide, but the boards were only 46 inches long, which won’t work for a four foot wide cabinet.   Nobody has 11 inch wide material; most online vendors said their boards were four inches wide, which wasn’t appealing. I finally ordered some wood that was over 5 inches wide with some nine inch boards.  The length ended up being seven feet, the worst possible length for my four foot wide cabinet.   As I began to work the wood I found that the guy with the chainsaw delivered nice looking, wide boards, but they were pretty badly twisted, so jointing the lumber by hand was a lot of work. But the real lumber yard delivered wood that was riddled with cracks across the face of the boards. I’m guessing this is the drying defect known as “honeycombing.”

This board has several cracks across its surface that you can see if you enlarge the image.

For the panels of the sliding doors I selected some spalted quilted maple material. This too, turned out to suffer from drying defects. I had the option of returning it or working with it and ended up deciding to fill the cracks and move ahead, rather than trying to locate a different panel. I tried to plane the material slightly to decrease the size of the cracks…but they got bigger instead. I chose to fill the cracks with black epoxy, hoping that it would match the spalting lines and blend in. It seems like most people think this looks fine, but I’m less enthusiastic.

As always, the process of selecting wood for different parts of the project went slowly. I began by choosing wood for the sides because I wanted to use the short, wide pieces there. Then came the task of selecting rail and stile material. One thing I love about quarter sawn wood is the ray flecking, but for the rails and stiles I wanted it to be really more rift sawn: straight grained without fleck to provide a good frame to the busy internal panel. Then it was time to get to work. I cut the grooves using my Veritas plow plane.

Note the fuzzy tear out towards the back end of the plane on the front edge of the groove.

I had a lot of problems with tear out while making these cuts. Part of the problem was user error: if I tipped the plane even a bit it could rip out a chunk on the side wall of the groove. But because the wood is quarter sawn, the edge, where I’m cutting the groove, has badly behaved grain. I did find that the front edge of the groove came out worse than the back one every time. I think this is because I can tip the plane toward me but the fence prevents me from tipping it the other way. I switched my reference around and referenced from the back of the panels to get the best looking show side. But it seems that ultimately to get a nice groove in material with reversing grain you have to precut the groove edges with a chisel.

The spalted maple panels were very porous, and when I started applying shellac the liquid quickly vanished into the wood. When the finishing was complete I discovered that the wood had warped considerably. I tried to flatten it by putting some shellac on the back. This helped a bit, but the panel remained warped. People use to say you needed to finish both sides of a panel to prevent warping. Then this idea got attacked as a myth. I wonder if I had finished both sides exactly the same would the panel have stayed flat and made the assembly easier—it’s more difficult to squeeze a warped panel into a groove.

This panel was flat before I applied shellac. Note the shadow of the straight edge on the wood.

I cut mortise and tenon joints to hold the panels together. The joints weren’t my best fitting. I had been wondering whether to drawbore or not, and decided I had better drawbore.  A drawbore is a joint where a peg is inserted through the joint but holes are misaligned so that the peg has to bend a little bit and it strongly forces the joint together.  Based on Schwarz’s recommendation I offset my 1/4” drawbore holes by 3/32” for my first door. I made riven white oak pegs using a dowel plate and cut a taper at the starting end. When I went to hammer the pegs home, though, I had some problems. I had tested the joint with drawbore pins and it seemed to be OK. But the pegs splintered inside the work, with only part of the peg emerging on the back side. Additionally, they forced the joint to come together crookedly so that the door didn’t lie flat on the bench. When I remembered to put glue on the peg it worked a bit better, but I only remembered one out of four times to do that. Application of a mallet and clamping the door flat onto the bench seemed to correct the problem.  The pictures below show four pegs from the back.  The top left is a peg that was lubed with glue and went through neatly.  The bottom left peg opened a gap, the top right peg was somewhat mangled and the bottom right beg lost a quarter of itself somewhere in the hole, leaving a gaping space. 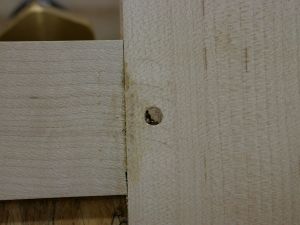 For the second door I adjusted the procedure. I used a 1/16” offset and I put the pegs into a cup of glue so I wouldn’t forget to lubricate them with the hide glue I was using. This door went together much more smoothly, without the problems I had on door number one.  Some of the pegs look bad on the back of the door, but as these are sliding doors, nobody will see them.  The front pegs look good. 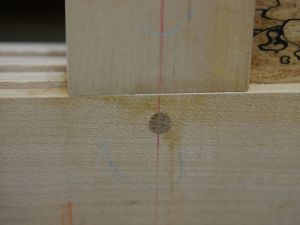 The last issue is securing the panels so that they stay centered in the groove if the panel shrinks or expands.  I’ve seen special foam balls sold for this job, but that solution wasn’t appealing.  It sounds like a standard solution is to hammer in a nail at the panel center but I realized I wasn’t sure how the nail should go in.  If I tried to angle it then the nail would almost completely miss the panel.  I had some 1.25″ cut nails handy.  I trimmed them to be about 1/2″ long, oriented them correctly to the grain of the frame and tapped them into pilot holes.  Nothing split, and hopefully they actually pierced the panels, so they should do the job.  I wonder if a dab of glue would have been an easier solution?  Would that hold well enough if I can only squirt it into an already assembled panel from the outside? 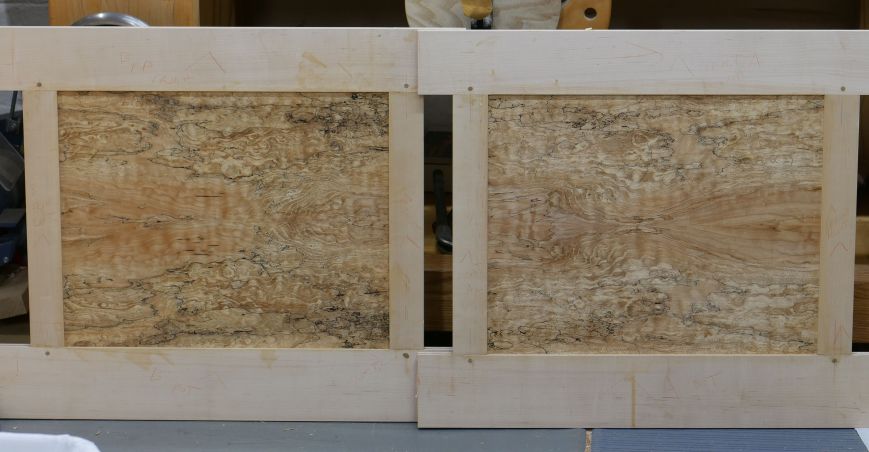 Finished door panels. Note that the rails are overly long and still need to be cut flush with the stiles.

Now it’s back to lumber selection. I need to select boards to use for the top of the cabinet, and then see if I have enough wood to make the dividers. I am thinking that I may have to glue up three foot lengths into a four foot long panel butcher block style to use the lumber I have on hand.

I haven’t quite figured out the proportions for the drawers.  Here is a subtle change in the drawer proportions.  Which is better?

Another outstanding design question is: can I do something with the drawers to unify them with the much darker spalted panels on the sliding doors below. Perhaps spalted maple drawer pulls would have this effect?