Time has been short over the past few years, so progress has been slow, but the case is finally glued together.  It is four feet wide and about 3 feet tall and is dovetailed.  Unlike my file cabinet, the dovetails are half-blind, and will be invisible once I attach the top.  The first challenge was to select the lumber and glue the panels together.   I started with lumber that came in seven foot lengths (from the lumberyard) or 3.5 foot lengths (from the independent sawyer), so I wasn’t sure I had enough material.  The discovery that some of the seven foot material was defective created additional uncertainty.

I decided to glue together panels butcher-block style using my shorter offcuts, and use the resulting boards in the less visible interior parts of the cabinet.  However, I soon realized that this would not suffice: I would still run out of wood.  So I hit the lumber yard and got some plain sawn hard maple to use for the interior panels.

Notice the front panel has two plain sawn boards in the center, flanked by quarter sawn boards at either edge. This will be the bottom of the cabinet, and will always be covered by stuff, so it won’t be seen.

The first joint to cut was eighteen inch wide half-blind dovetails at the bottom of the case.  I laid out the tails using dividers and a bevel gauge, and cut them.  I proceeded next with the pins, which presented several difficulties.  The first one was marking them.  I had great difficulty finding a way to align the boards in my shop for marking due to the four foot length of the tail board.   If my bench were not against a wall this would be simple, but instead I had to balance the boards on edge and clamp them together to do the marking.  At one point during this process the tail board fell off the bench.  You can see the dent at the top right (front board) in the picture.

I sawed the pins and then attempted to hammer the kerfs deeper using a small scraper I used previously for this job.  Evidently the wood species makes a difference for this technique.  This was easy with mahogany, which is soft.  But with hard maple, and the larger scale of the joint, the scraper folded over from hammer blows and became wedged into the kerf so tightly that I need pliers to extract it.   I like this technique, so I bought a specialized tool for extending kerfs.  This tool, with its solid brass back and large handle solved both of the problems.

But my problems weren’t over yet.  Chiseling out the waste can be done in various different ways, but it seems that they ultimately involve taking some thin shavings parallel to the socket wall.  Charlesworth’s clever technique with a slightly thick guide block guarantees a slight undercut so the joint will fit.  At least, that’s the theory.  And it worked great on board number one.  But on the second board the grain direction went the wrong way, and no matter how I tried to execute this technique, the wood would rip up.  I finally gave up and deployed the router plane to try to fix the problem.  (One thing I didn’t try: sharpening my chisels.  I wonder if that would have made a difference.) 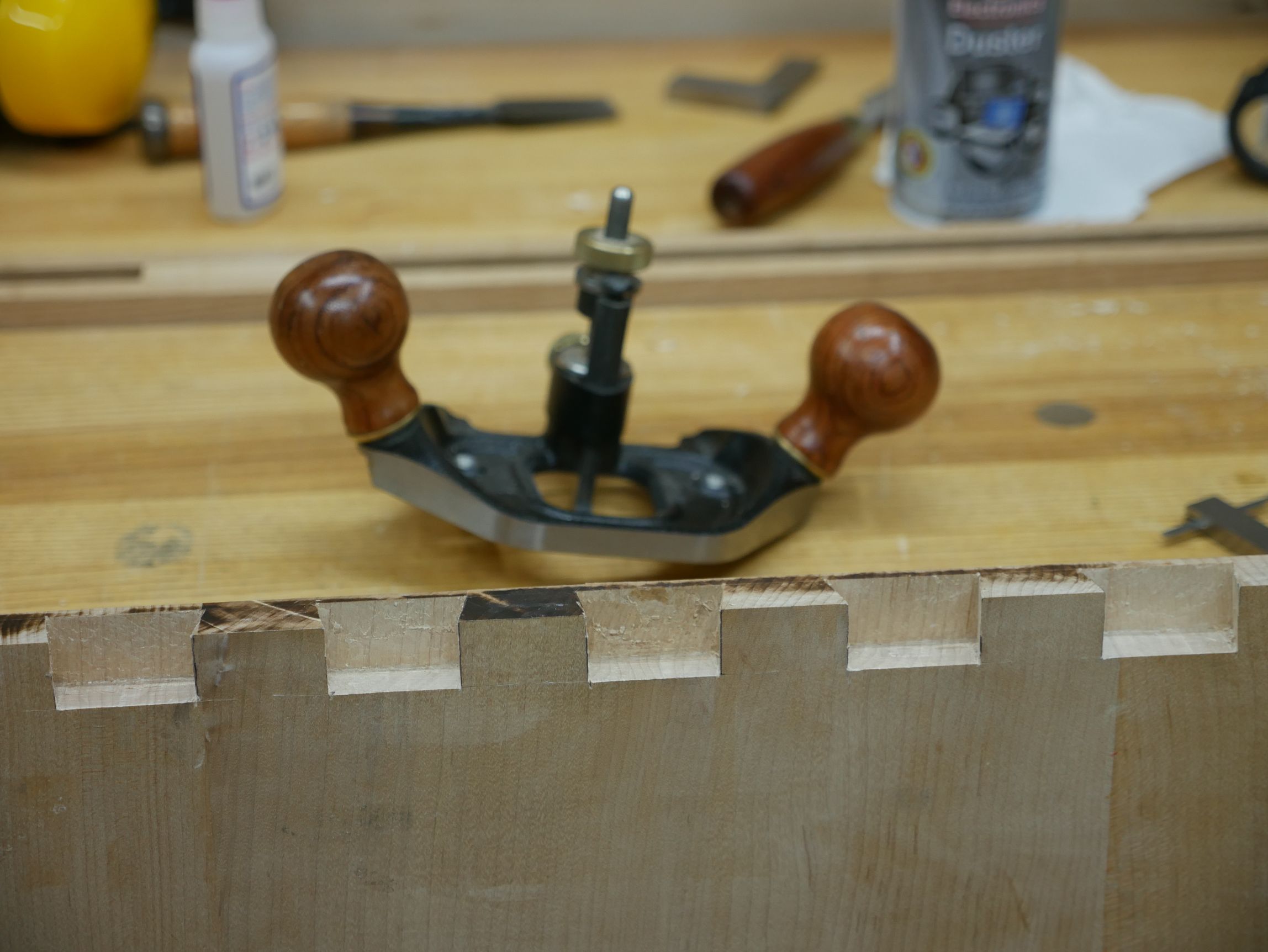 After finishing the joint I cut a rabbet along the rear edge to hold a plywood back.  I didn’t do it earlier because I didn’t have the plywood for the back and wasn’t sure about the thickness.  This was unfortunate because it turns out the dovetail should have been cut to accommodate  the through rabbet.

Again, grain direction presented a challenge.  I cut the rabbet on the first board with my rabbet plane and got a nice crisp rabbet.  On the second board the grain went the wrong way for my plane and it reversed.  The result was nasty tear-out.  I tried going in the other direction using various other planes.  I’m not sure if the problem was hard to fix at this point because the existing surface was already so rough, or if it was just impossible to cut the wood cleanly in either direction.   I thought about buying the left handed rabbet plane, but instead I gave up and cut the joint with the router on the router table.  And I found that climb cutting was essential to get a smooth finish from the router.

For the horizontal divider I cut a 1/2″ dado using my HNT Gordon dado plane.  This plane worked very well against my clamped fence.   (Maybe I need their moving fillister plane for cutting rabbets, with it’s 60 degree cutting angle.)

I only have the 1/2″ dado plane, but none of my boards are 1/2″ thick.  The horizontal divider boards that goes in this dado is is 3/4″ thick.  Two solutions are apparent: widen the dado or trim the board.  In this case, I trimmed the board by cutting a 1/4″ rabbet at each end.   The case also includes a pair of vertical dividers, which are only 5/8″ thick.   In this case, I took the other approach, opting to widen the dado.  This proves to be possible with care by shifting the fence over and cutting again.  (I fails if the extra cut is less than 1/8″—the plane falls off the edge and cuts a slope in this case.)  In all my trials and in 5 out of 6 dados on the cabinet the nicker did its job and the plane produced a smooth exit, but I did encounter one case of spelching, where a large chip pulled off.  I wonder what caused that.

To conserve wood I made the top of the case from three rails instead of a solid panel.   This time I did the dovetail joint correctly to fill in the through rabbet at the ends.   I decided to get a saddle square dovetail marker, and I must say it really did streamline the tail marking.   It is nice to  quickly mark the square line across the edge and the sloping line down the face of the board without having to fuss with lining up the marks.

A dovetail saddle marker like this is helpful because you can mark across the top and then down the front in one step.

The assembled joint looks like this, with the extra block to fill in the gap in the side panel: 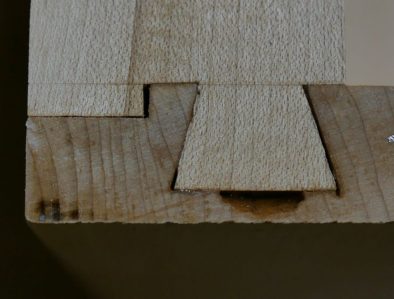 These joints certainly won’t win any prizes. They may be the worst fit dovetails on the internet. I think the first dovetails I ever cut looked quite a bit better.  But these joints, as bad as they look, didn’t rattle around once assembled, and the big gaps will be hidden when the top goes on.  Luckily the chunk that broke out on the right side didn’t break through the surface of the board.  The only part that will be visible is at the back of the case, and that part is tight: 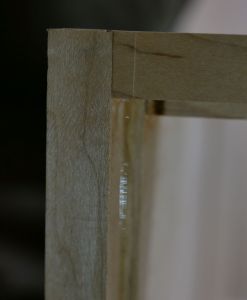 The final step before the glue-up was to cut grooves for the sliding doors. I’ve had a lot of trouble cutting grooves (and rabbets along the grain) on this project, so I wasn’t sure of the best approach. My first attempt was to mark the edges of the groove, and chisel out along the groove. This left a block of waste in the groove, which I attempted to remove using the Veritas combination plane, which I selected because it could be configured for left-handed use as required by the grain (except for the section where the grain is reversed). The plow plane has a circular nicker blade but this plane has short straight nicker blades that are apparently meant to bend outward for adjustment with small set screws. Unfortunately, I didn’t realize that the nickers needed to be removed for this job. Because I was removing a strip of wood with a space on either side, the nickers weren’t engaged in the wood and they splayed out and started cutting along the keeper material adjacent to the groove. I didn’t notice the problem until the board was badly scarred with many cuts along the side of the groove. I attempted to repair the damage by inserting patch pieces, thinking that the second groove would hide the joint, but I miscalculated the location of the second groove. I may redo the really obvious patch shown here.

Ugly patch, right in the center.

I made a second patch that is several inches long which blends somewhat better. Can you find it?

Finally the it was time for glue. The resulting glued up cabinet still lacks the back and the top, which I think will make it easier to fit the drawers.

Here it is with the top and backsplash boards resting on the case. 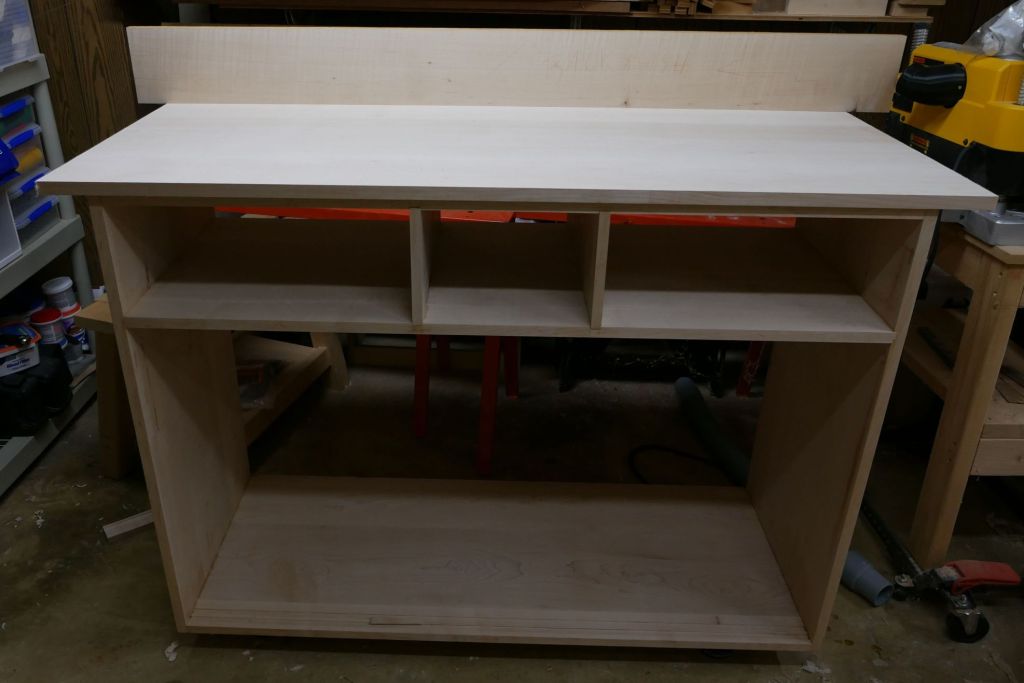 The next step is to decide on the final shape for the top and glue the backsplash and to together. After that, I will make the drawers, and I have to resolve the last major design question: what will the drawer pulls look like?