At Terpsichore I was advised that having the swing end against the phrase was really not good, and also that the pass through progression could be done in 4 counts, so I made a version of the dance that should be easier to dance, where the swings end on the phrase. Unfortunately, there didn’t seem to be an opportunity to actually dance it.

I have been contra dancing for many years, but I was never inspired to write contra dances.  There are thousands of great dances already written, after all.  This changed after a botched walk-through of a Becket dance, where we progressed incorrectly: in addition to moving up the set we also switched sides.  I thought that it would be interesting to have a dance that intentionally progressed in this fashion.  Here is a diagram with the band shown by musical notes at the bottom, and couples shown by letters and numbers: 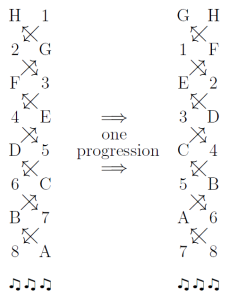 I thought about this for a while, and I realized why dances like this don’t seem to exist.  To make this work well, you really want each minor set to turn in the opposite direction as the last one, something which is hard to do.  You can’t give different instructions to the odd sets and the even sets, but that’s you want to get the dancers to progress the right direction: couple A moves to their right while couple B moves to their left.  So getting the progression to happen properly is difficult.

At Timber Ridge Family Camp I decided mid-week that if I was going to write this dance, I should do it there, because I’d have a chance of walking it through to test it.  I found it interesting how writing a dance required me to think differently about the dance figures and how they flow together.  An initial version had long lines followed by a swing, and someone commented that it didn’t flow very well.

I did finally come up with something, and we walked it through late at night on the last night, and it seemed to work, but we didn’t try it with music.  In some ways the dance is like a four facing four:  you have to end a swing facing in the direction of progression.  And it has a quirk:  it’s a double progression dance, and you swing your neighbor, but you end up seeing the same neighbor twice and then skipping the next three neighbors.  Here it is: