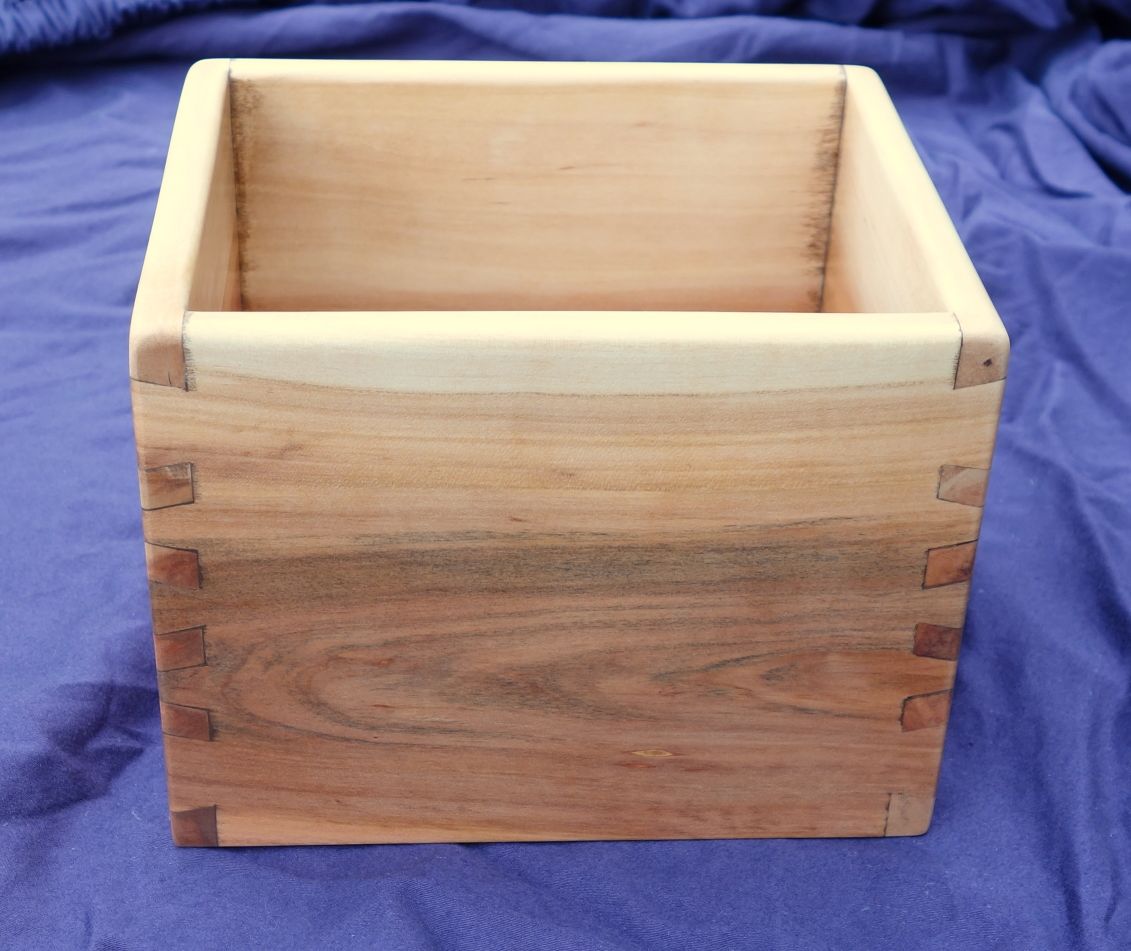 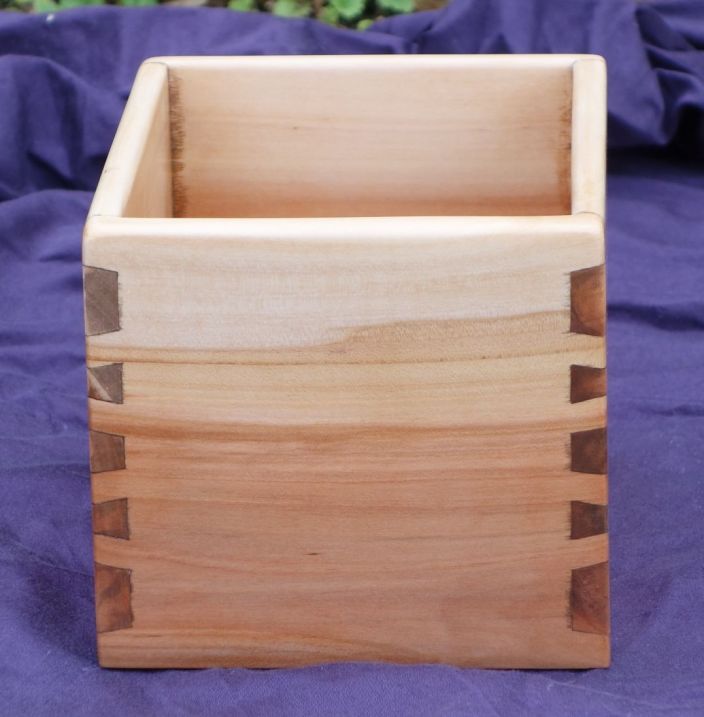 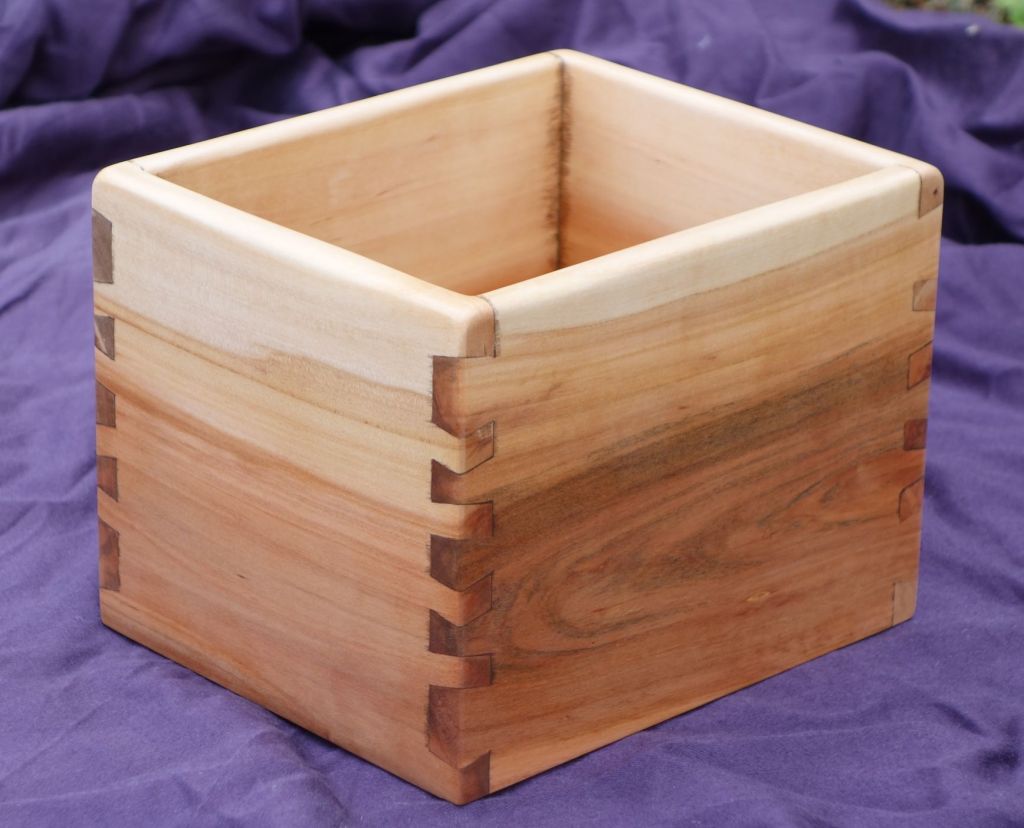 I’ve been intrigued by the twisted dovetail joint, also known as nejiri arigata.   This joint looks impossible to assemble because it appears locked in both directions.  The secret is that it assembles diagonally.   I needed a small trash can for tissues and decided that this gave me the opportunity to try out the joint.  Here are the before and after pictures showing the cardboard box version adorning a mahogany writing desk, and the wooden replacement: 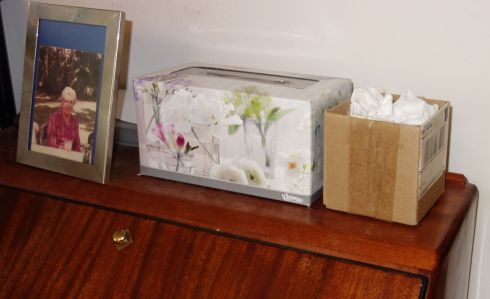 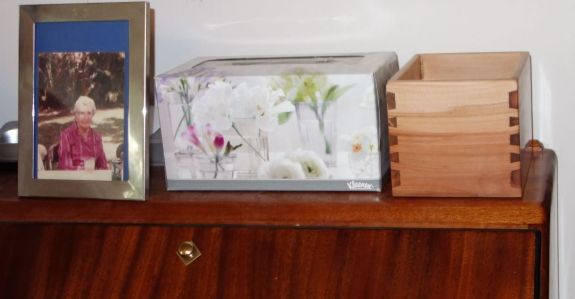 To make this box I selected some apple wood I had lying around from when our apple tree fell down.  I picked out all the interesting pieces—I’m not sure what I’ll do with the rest.  The next challenge was to learn how to lay out this joint.   Not like this 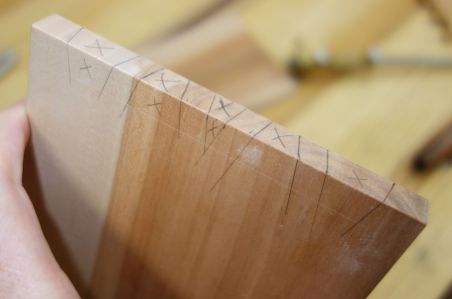 Everything looked spacious on the edge, but when the lines are carried down the sides that middle section is less than 1/16 inch wide.

I don’t have a chisel narrow enough to cut out that center bit.  It took me a while to learn a method for laying this out, and nobody seems to have written about this in much detail.  First of all, the joint is more like a twisted finger joint than a twisted dovetail.  I guess “twisted finger joint” doesn’t have the same ring as “twisted dovetail.”  The two halves are made the same way.  I set my bevel gauge to a fairly steep angle (12°) to give a well defined slant and marked out along the edge.  Then using the same angle I marked along the surface that is going to go outside the joint: 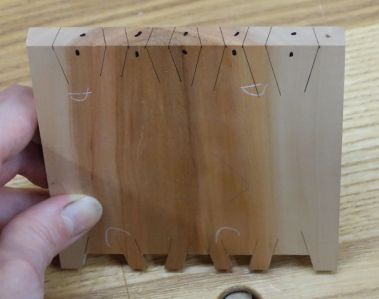 The important thing to note is that you always choose the angle of the cut to make a sharp pointy corner.  I think about it as changing the direction of the line that I’m extending from the top edge.  Next I mark the inside of the joint: 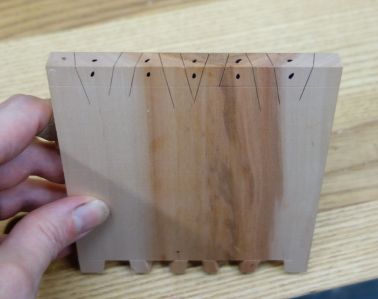 On the inside the lines make an obtuse angle.   I think about this as continuing the line in the same direction as the line I’m extending from the top edge.    So here is one side of the joint cut:

First half of joint viewed from the inside corner. 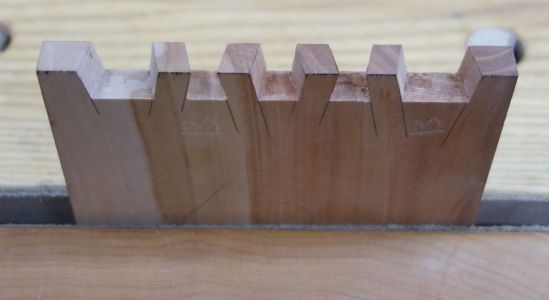 First half of the joint viewed from the outside corner.

To lay out the second half of the joint I mark the first half by lining them up like this.  I would say this is easier than transferring a normal dovetail joint.

After marking the second half this way I extend the joint exactly the same way as for the first half.  The only difference between the two halves is which part is marked for removal.  The finished joint looks like this:

Second half of the joint viewed from the inside corner. 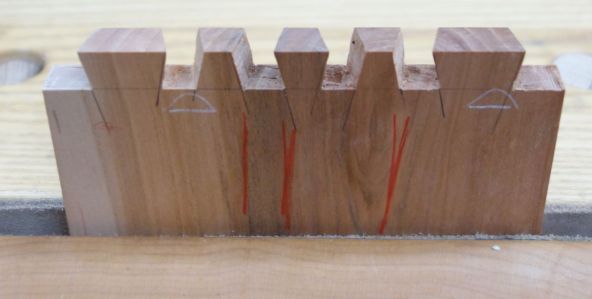 Second half of the joint viewed from the outside corner. 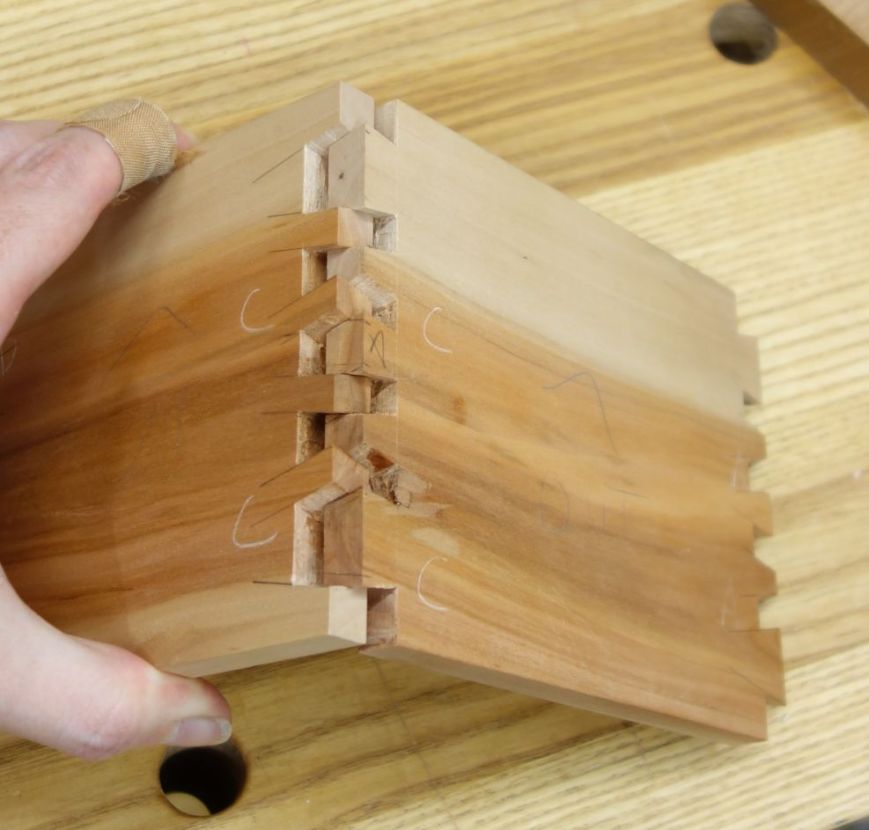 Here are a few observations about this joint.  It doesn’t lock together the same way a dovetail joint does.  Many of the sockets, due to their slope, tend to be trying to force the joint apart even while you’re trying to fit it together.  This is different from a dovetail where the side walls are straight.  When the joint is too tight it goes together like this: 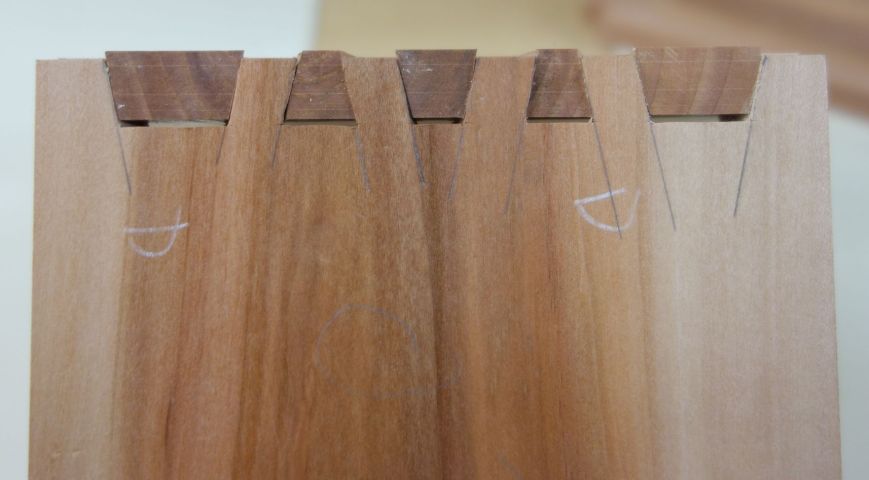 I think this joint locks less well than dovetails, so it’s probably weaker.  I found it necessary to use clamps during glue-up to ensure that the joint was actually all the way together.  With dovetails, clamps aren’t usually needed, except possibly to coax the joint shut.  When the joint didn’t fit I had a harder time figuring out why than with dovetails.  In the end I think that a non-woodworker probably won’t notice the difference between this joint and a dovetail joint, so it’s probably the sort of thing one does just to impress and puzzle other people in the craft who wonder how it went together.  In other words:  this joint is not worth the trouble.   Another lesson learned: don’t use dark colored glue.  Note that the glue wicked up the end grain and left lines that couldn’t be planed away.