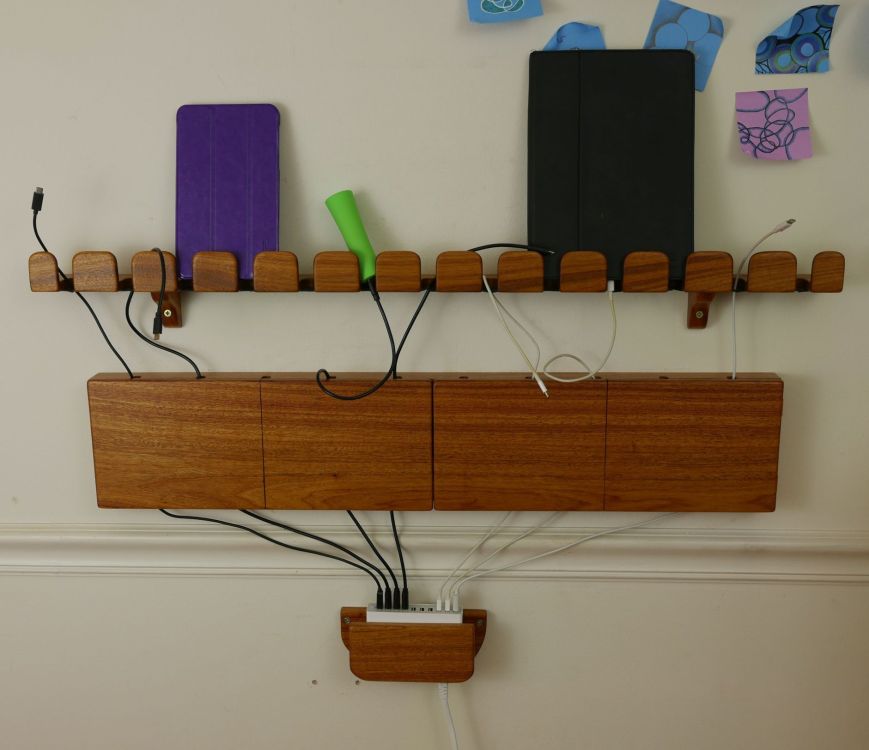 After a few years of testing and a few changes to the original design, the time came for the final version:  we got more devices and the prototype wasn’t big enough.

I made the final version from canarywood scraps I had lying around.  The space on the wall allowed me to fit a thirty inch wide shelf to hold the devices.  Hopefully this will suffice for all the devices the household requires.  To make the shelf I glued together two pieces of canarywood, drilled holes at the base of each slot, and finally cut out the thirteen slots with a hand saw.   Shaping and smoothing these slots and, finally, sanding them was extremely time consuming.   My saw cuts weren’t precisely tangent to the holes I drilled, so those transitions all needed attention.  I had to round over all of the top corners.  Finishing end grain is always more work, and this design creates a lot of exposed end grain that is hard to get to.   Is there a way to change the design to make the build easier?

I glued a continuous strip of the EPDM rubber along the slots. I punched a 7/64″ hole and then cut a slit leading up to the hole.

My final selection for the cable gripping rubber was EPDM rubber, 1/16 inch thick, and 40A hardness.   I originally used 1/8 inch holes.  The 1/8″ holes are great when they work, because they grip the cables tightly, but they are too small for some thick USB cables.   I had to increase the size to 7/64″ to accommodate these fatter cables.  This does mean that the rubber almost never actually grips the cable.  It just confines it.  For my prototype I glued on the rubber using epoxy, but the rubber peeled off in some places.  In looking for an alternative I found Nexabond, a slow curing cyanoacrylate adhesive, which seems to dissolve the rubber and create a very strong bond.  Nexabond is now sold as Rapid Fuse.  I used the variety marketed for wood.   I found that it’s not possible to clean it off the rubber, so I had to be careful when applying it to avoid excessive squeeze out, but to use enough to secure the rubber all the way to the edge of the wood. 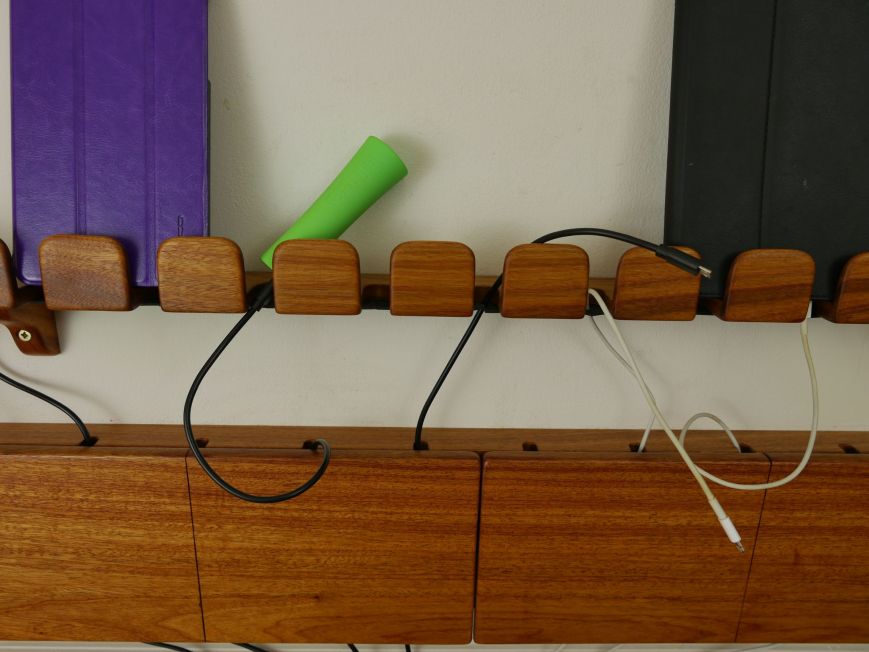 The rubber loosely grips the cables. The USB plug can rest in the space in front of the rubber in each slot.

The cable management box was hard for me to design.   My original design left the wrapped cables exposed.  I found that users often leave the ends of the cables dangling over the cable management box rather than securing them above on the shelf.  The dangling cables combined with the exposed wrapped cables form a very busy visual image, and it is hard to identify the loose ends that you may want to plug into your dying device.  In the prototype, I added a cover secured with a pair of magnets.  Maybe this approach could work somehow, but two problems would need to be addressed.  I was never sure where to put the cover after removing it, and I found it hard to close it because the cover would snap suddenly into place and I had to make sure it didn’t capture any cables over its whole width.   However, a normal hinged door would extend 15 inches, which seems unwieldy.  I  considered doors that swiveled down, but one of them would collide with the USB hub.  Finally, after talking with a friend about my design challenge, I revisited the idea of a hinged door and hit on the idea of a door that folds in half.

Two doors, each with a hinge in the center so they can fold in half.  Note the continuous grain lines across all four parts of the door. 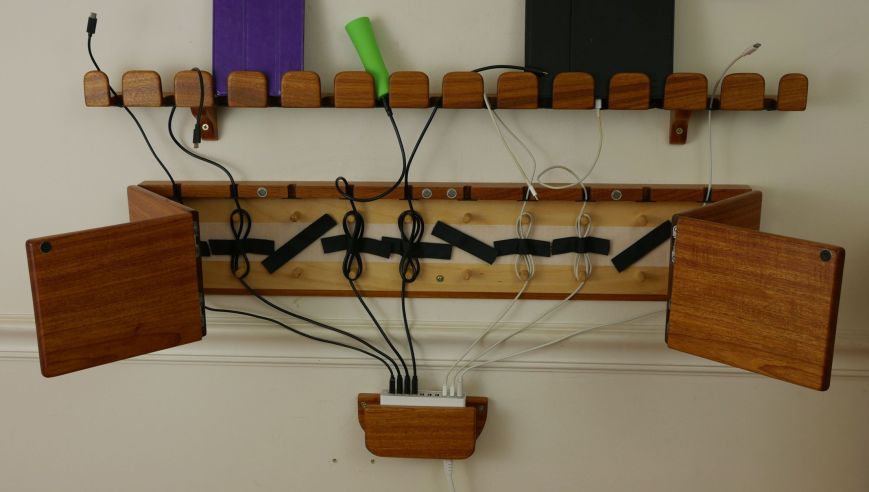 If necessary you can open the second section of the doors, which have their own separate magnetic latches.

Selecting hinges was another challenge.   I hadn’t been planning to spend so much on hardware for this project.  The hidden hinges in the middle of each door are Soss Invisible hinges, and I ended up using Brusso brass butt hinges to mount the doors to the frame.   The Soss hinges come in a brass finish, which would have blended better, but when I found these on ebay for half price I decided I’d take them.  I love magnets, but getting the right magnetic force seems to be an ongoing challenge.  In this case, I mounted 3/8 inch magnets using screw in cups.  The resulting magnetic force was excessive.   One solution is to recess the mating washers farther into the wood (to increase the distance), but once the magnets are installed it is impossible to remove them.  In fact, once the steel cups are installed I find that they fit so tightly it is impossible to remove them, even before screwing them in.  Covering the magnets with high friction disks provided some extra separation that weakened the magnetic force enough to make the doors useful, though they do still stick shut a little bit more strongly than I would prefer.

For securing the cables I use a pair of 3/8 inch dowels and wrap the cables in a figure eight fashion.  I have seen quite a few gizmos for managing cables and, from what I can tell, none of them works as well as just wrapping cables in a figure eight; the cables don’t tangle, and you don’t need a special device.  Try it with your earbuds.  A strip of velcro holds each cable in place.  I used a two inch wide strip of white velcro hook material for the back of the box and I secured the cables using 3/4 inch black loop strips.   Reportedly the loop side of the velcro wears out first, so I used it in the more easily replaceable location.   Along the top edge of the box I made small cutouts for rubber cable holders.  These hold the cables up if you open the box.

The doors open all the way out and can tuck up against the wall at the sides. We secure the cables using figure eight wrapping onto two posts, with a strip of velcro to hold them in place. I chose white velcro for the background so it’s easy to see the black velcro that holds down the cables.

Installation of the Soss hinges requires a weird shaped mortise 3/8 inches wide with rounded ends and a deeper center section.  I drilled this using a centering drill guide and a brad point bit.  I had some trouble with hole depth and later found myself trying to deepen parts of the mortises with chisels.  But eventually I got the mortises cut.  For hardware installation I chose to use machine screws, both for the Soss hinges and the Brusso hinges.  Many people recommend machine screws for wood, especially when the screws are small and short.  I thought I would be installing and removing the screws many times, so this supported my decision to use machine screws.  In the case of the Soss hinges, the fit in the mortises was very tight.  They weren’t going  anywhere.  It was hard to take the hinges out after test fitting them in the holes.  Strength of the screws wouldn’t have made a difference.  And since it was so hard to install and remove the hinges I ended up doing it only one time and doing the finishing with the hinges installed.   I also broke two 4-40 taps cutting the threads.  In retrospect, I think this happened because I pre-drilled holes that were a size too small.

I installed the Brusso hinges using chisels and a router plane, a process that I enjoyed much more than drilling with a guide.  And I didn’t break the tap when cutting threads for 2-56 screws.  Using machine screws here seemed like the right thing to do.  The hinges didn’t stay in their mortises from friction alone like the Soss ones, and the use of machine screws enabled me to use longer screws on the frame and shorter ones on the door without having to buy two boxes of screws.  My wire cutters cut easily through the brass machine screws so I could make the lengths I needed.   I did end up installing and removing the hinges several times.

One disappointment is that the Soss hinges have a little bit of slop in them.  I’m not sure if I loosened them up somehow while prying them out of their mortises after test fitting, but if I close the doors without trying to force them upward they don’t create an even gap. 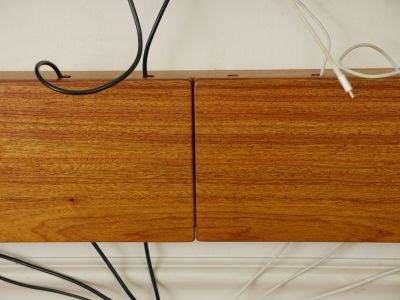 Uniform gap between the doors. 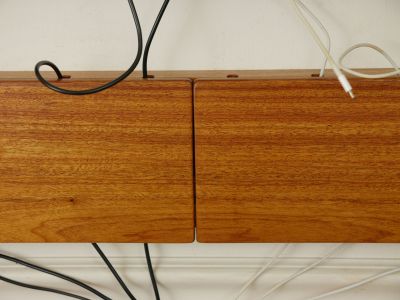 Uneven gap between the doors, narrower at the top.

The final component of the charging station is the hub holder.   As long as we charge devices using cables, the rest of the ensemble can remain unchanged, but this hub is the part most likely to change in the future.  It already changed: I have a new hub with more ports.  I didn’t want to work too hard on this part so I used a simple design that is very easy to make and somewhat adaptable—unlike the prototype it can at least accommodate charging hubs of varying length.  This design requires no complex joinery since the wood grain all runs in the same direction.  I tried to shape it to echo the curves of the shelf at the top, with the the back section sticking out to the sides for easy screw mounting. 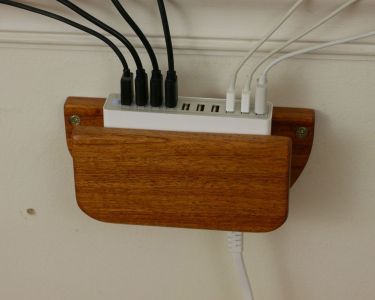 I think overall this is a great design for a charging station. It only uses wall space, not desk space, and keeps all our devices out of the way. I’m happy with the final result. The only thing that could be improved is the location of cable holding holes in the rubber. These holes are about an inch behind the front of the slot, and this is a little bit too far. Three fourths of an inch would be better.